A walk through Rome’s popular quarters. 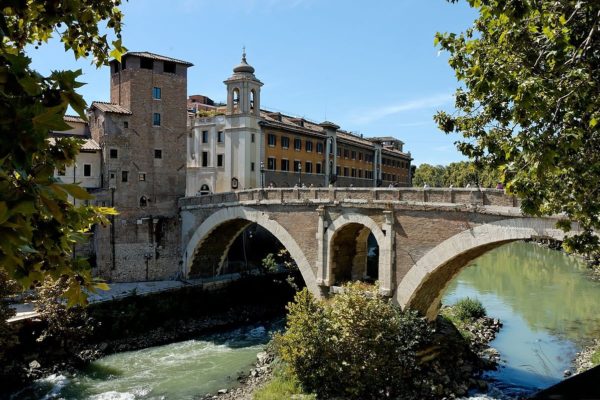 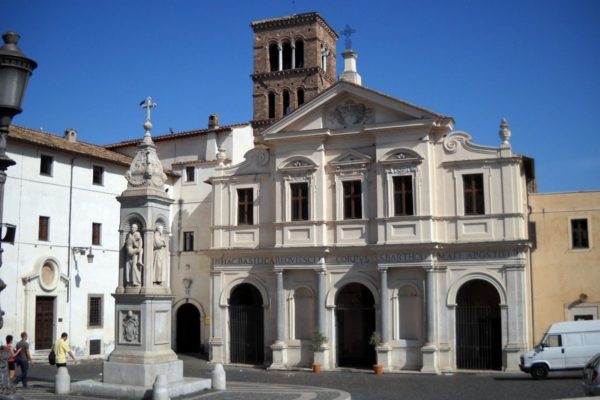 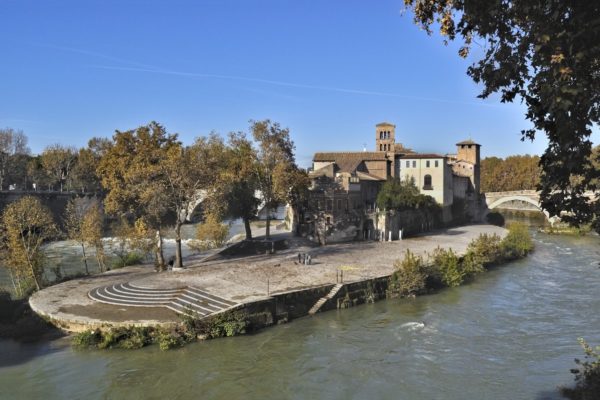 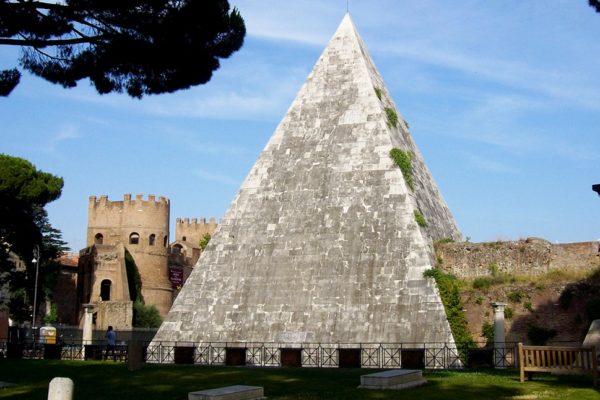 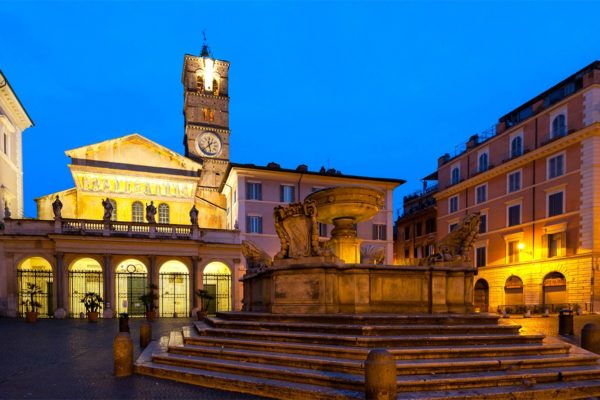 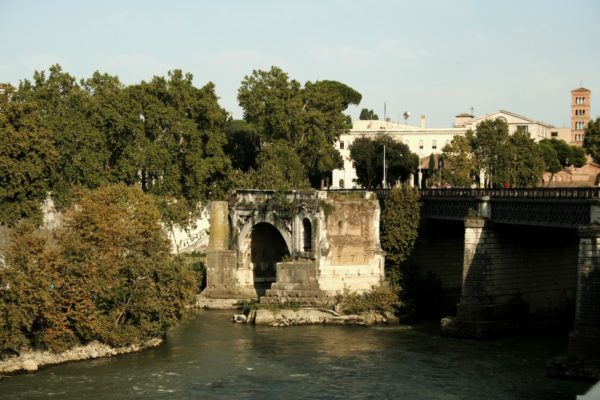 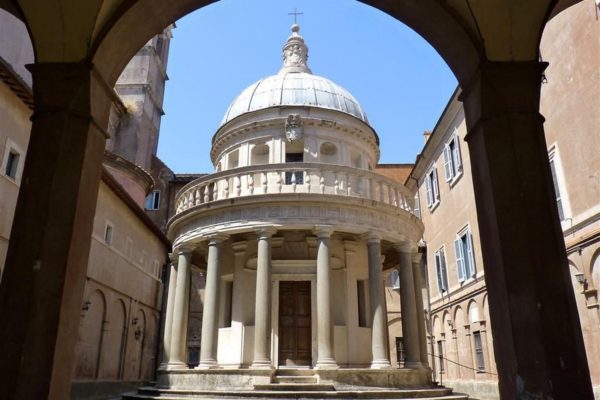 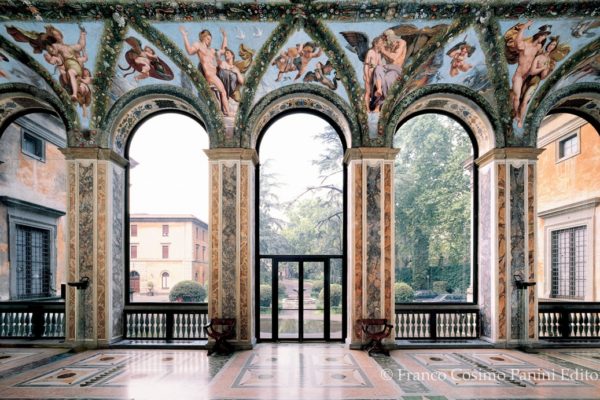 Pons Fabricius on the Tiber Island

This bridge, built in 62 BC is the oldest bridge in Rome still in use.

The island has been associated with healing from the 3rd century BC when a temple was erected to the Greek god of healing Aesculapius. A hospital run by the order of Fatebenefratelli was founded in 1583 and has been functioning since then. It is one of the favourite sites for birth giving by Roman women.

The church of San Bartolomeo on the island was built in the10th century on the ruins of the ancient Roman temple of Aesculapius.

The remains of this ‘broken bridge’ are of the Pons Aemilius built in the 2nd century BC. It was the first stone bridge built in Rome. The bridge was repaired several occasion until 1598, when its eastern half was carried away. The remaining half was demolished in the 1880s, leaving behind only one arch.

Beneath the existing Basilica are the remains of an earlier Christian church dating from the 5th century, built on the remains of a private Roman house, a so called Titulus Chrysogoni, a name which derives from the marble slab on which the proprietor’s name was engraved.

This piazza in the heart of the lively Trastevere district, is a great place for watching people go by. At night it is a favourite hangout for young people, street musicians and performers.

The basilica of Santa Maria in Trastevere which dominates the square originates in the 3rd century though the present structure was built in 1138 and features a stunning 12th century mosaic of the Virgin feeding baby Jesus. This is possibly the oldest church dedicated to the Virgin Mary in Rome.

The fountain in the center of the Piazza is of Roman origin and was restored in the late 16th century.

This villa was built between 1508-1511 by Baldassarre Peruzzi, a pupil of Bramante, with the aid of Giuliano di Sangallo for Agostino Chigi, a rich banker from Siena. The interior of the villa is decorated with an extraordinary series of frescos of mythological scenes by great artists such as Sebastiano del Piombo, Giulio Romano, and the renowned frescoes of the Loggia by Raphael.

Refreshing gardens with excellent views of Rome across the Tiber.

Edified on the place where legend has it that Saint Peter was crucified. In it’s interior courtyard there is a small commemorative temple built by Donato Bramante. This little jewel provided a model on which many baroque architects referred to thereafter. The name Montorio derives from Mons aureus – golden hill, due to the colour of the earth on that Roman hill.

This piazza on a hill that overlooks the city sits like a terrace on the 17th century bastions of the Gianicolo and offers a stunning panoramic view of Rome.

The bronze equestrian statue is of Giuseppe Garibaldi considered a patriot hero, who helped to unify Italy in 1870.

This Church dedicated to Saint Francis of Assisi derives its name by the old port of Ripa on the nearby Tiber .The construction of the present church was begun in 1603 by Onorio Longhi, starting from the apse. The facade was finished in 1681-1701 with design by Mattia de Rossi. From 1873 to 1943 the church was used as barracks by the Bersaglieri (infantry ).

It is well worth a visit to admire the vividness and pathos of a great masterpiece of Baroque sculpture, Gian Lorenzo Bernini’s statue of the Beata Ludovica Albertoni.. This sculpture recalls the reclining statue of Saint Teresa in Estasi, also by Bernini, in the church of Santa Maria della Vittoria near the Piazza della Repubblica.

Legend has it that this 5th century church was built over the site where St Cecilia was martyred in 220. The theatrical sculpture of St. Cecilia by the late Renaissance sculptor Stefano Maderno was said to have been modelled on the Saint’s body as seen in 1595 when her tomb was opened. Although she had been beheaded, it was said that her body was found intact, thus the evidence of the decapitation on the statue.

The crypt decorated in cosmatesque style with the relics of St. Cecilia and St. Valerian is also a noteworthy.

The name of this small alley derives from the statue of a Roman athlete, said Apoxyomenos found on this site during the second half of the 18th century. Before this the alley was called Vicolo delle Palme, due to the palm trees that grew in front of the old Synagogue that originally stood in this spot. Further ahead on the nearby Via dei Genovesi under the restaurant ‘Spirito Divino’ you will stumble across some interesting Roman ruins.