Hotel Lancelot is located in one of Rome’s richest and most fascinating historical areas.
Read the article by art historian Richard Ingersoll “From the Gardens of Nero to Realm of Pope Joan” to discover the long and intriguing story of our neighborhood.

Go for the Neighbourhood Walk from the Hotel Lancelot .

From the Gardens of Nero to Realm of Pope Joan

A stone’s throw from the Colosseum to the north and St. John’s in the Lateran to the south, the Hotel Lancelot is framed by a rich texture of historical remnants. While the hotel may seem relatively new, occupying a 1930s apartment building and located on a street that was laid out at the end of the 19th century, its closest neighbors are among the oldest and most historically charged sites of Rome.

The Lancelot lies in a valley between the Oppian and Celian hills, an area that was confiscated by the Emperor Nero after the famous fire of 64 AD for the gardens of his Domus Aurea (or Golden House), an immense pleasuredome that skirted the Oppian hill. To indulge Nero’s theatrical whims the Domus Aurea (the subterranean remains of which have recently been reopened for tourist visits-be sure to dress warmly!) looked over an artificial lake, around which were placed miniature settings of famous places of the Mediterranean basin. Directly across from the Domus Aurea Nero constructed on the Celian Hill a magnificent temple platform, the Claudium, dedicated to his deified uncle Claudius, who had preceded him as emperor. Today the remains of the platform comprise the orchards of the 13th-century convent of Ss. Giovanni and Paolo.

After Nero’s demise and the popular uprisings that ensued in response to his tyrannical excesses, the new Flavian dynasty of emperors attempted to mollify public opinion with the celebrated policy of “panem et circensis” (bread and circuses), replacing the lake in Nero’s gardens with the immense vaulted structure of the Colosseum. This oval amphitheater, which seated 60,000 spectators for gladiatorial games, hunts with live animals, and mock sea battles, quickly became the symbol for the city and with time the metaphor for Rome’s claim on eternity. The Colosseum took its name from a colossal 100-foot statue, originally designed as a portrait of Nero in the guise of Helios, the sun god, and subsequently restyled as an anonymous sun god. The magnificent Arch of Constantine, the last triumphal arch to be built until the renaissance revival of ancient types, stands gracefully at the junction overlooking the Colosseum and the Via Sacra leading into the Forum district. If you look closely you will see the arch is a patchwork, composed of fragments taken from other triumphal monuments. 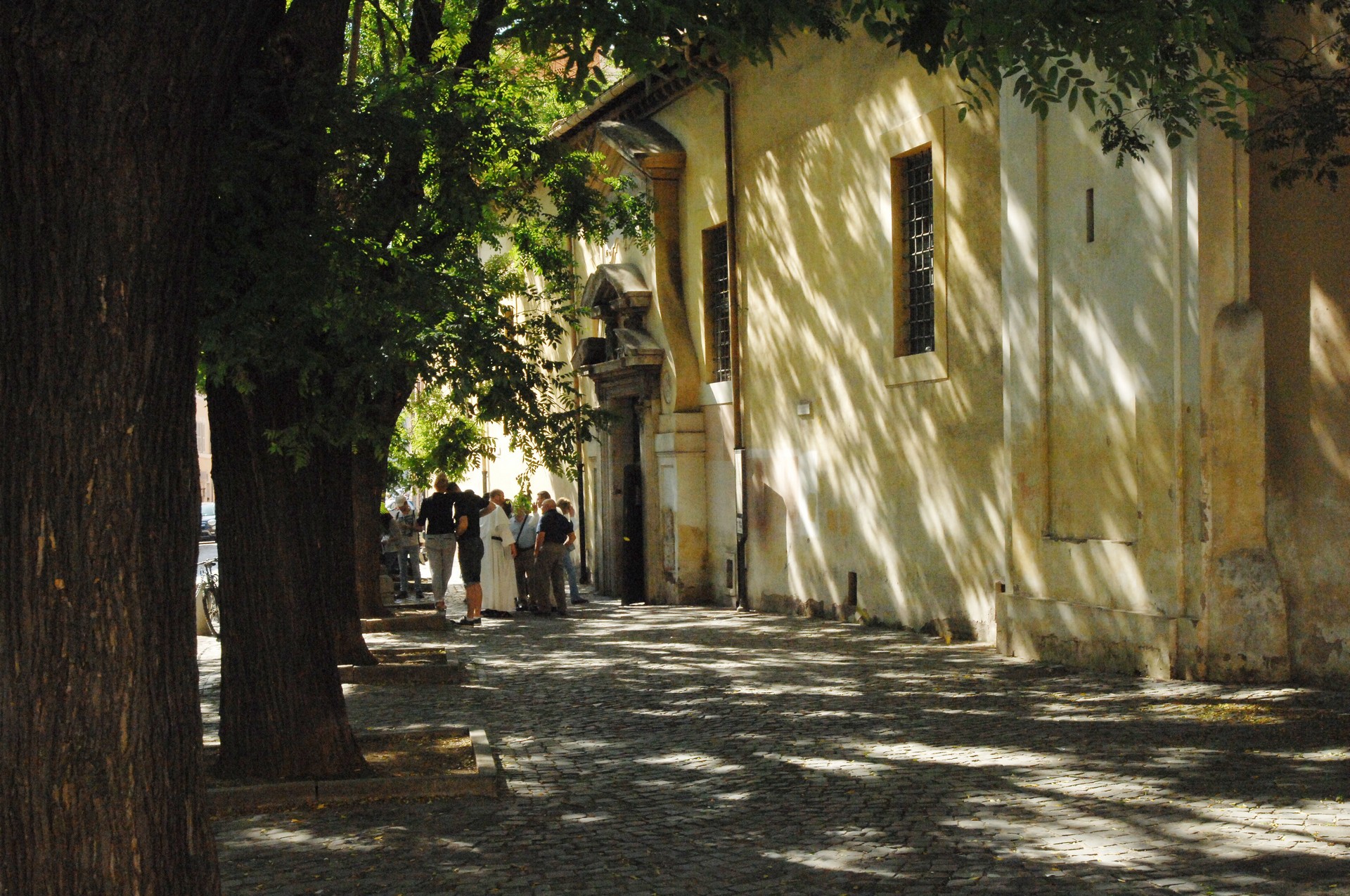 Just south of the Colosseum at the beginning of Via San Giovanni in Laterano lies a conspicuous archeological dig, the Ludus Magnus, showing the foundations of a smaller oval amphitheater that served the barracks of the gladiator school. During this period, the site of the Hotel Lancelot, like much of the district, most likely served for military barracks.

Farther south on Via San Giovanni in Laterano stands a church, San Clemente, which seems rather modest on the exterior but reveals on entry not only one of the most splendidly decorated interiors in Rome but also one of the most astounding testimonies of the coverup of time. If you proceed through the 12th-century nave, pass the brilliant gold mosaics of the apse and across a pavement of swirling pre-Cosmati marble inlays, you come to a side stair that leads down to the cavernous labyrinth of two earlier cult sites, a 5th century Christian basilica and beneath it a 2nd-century Mithraeum.

Once at the bottom, about 30 feet under ground you should be surprised to learn that this was originally the street level. Equally surprising is the evidence of a major alternative mystery cult to the nascent sect of Christianity. The initial building of the 1st century served briefly as an imperial mint, was transformed into a private dwelling, and its garden nympheum was converted into a temple for Mithras, a god of Persian origin usually depicted slaying a bull. Christianity prevailed over this Zoroastrian competitor, and in the process buried the Mithraeum, using it as the foundations for the apse of the church. Due to the rising level of the surrounding terrain and the poor structure of the initial basilica, it in turn was covered over and used as the foundations for the 12th-century church. 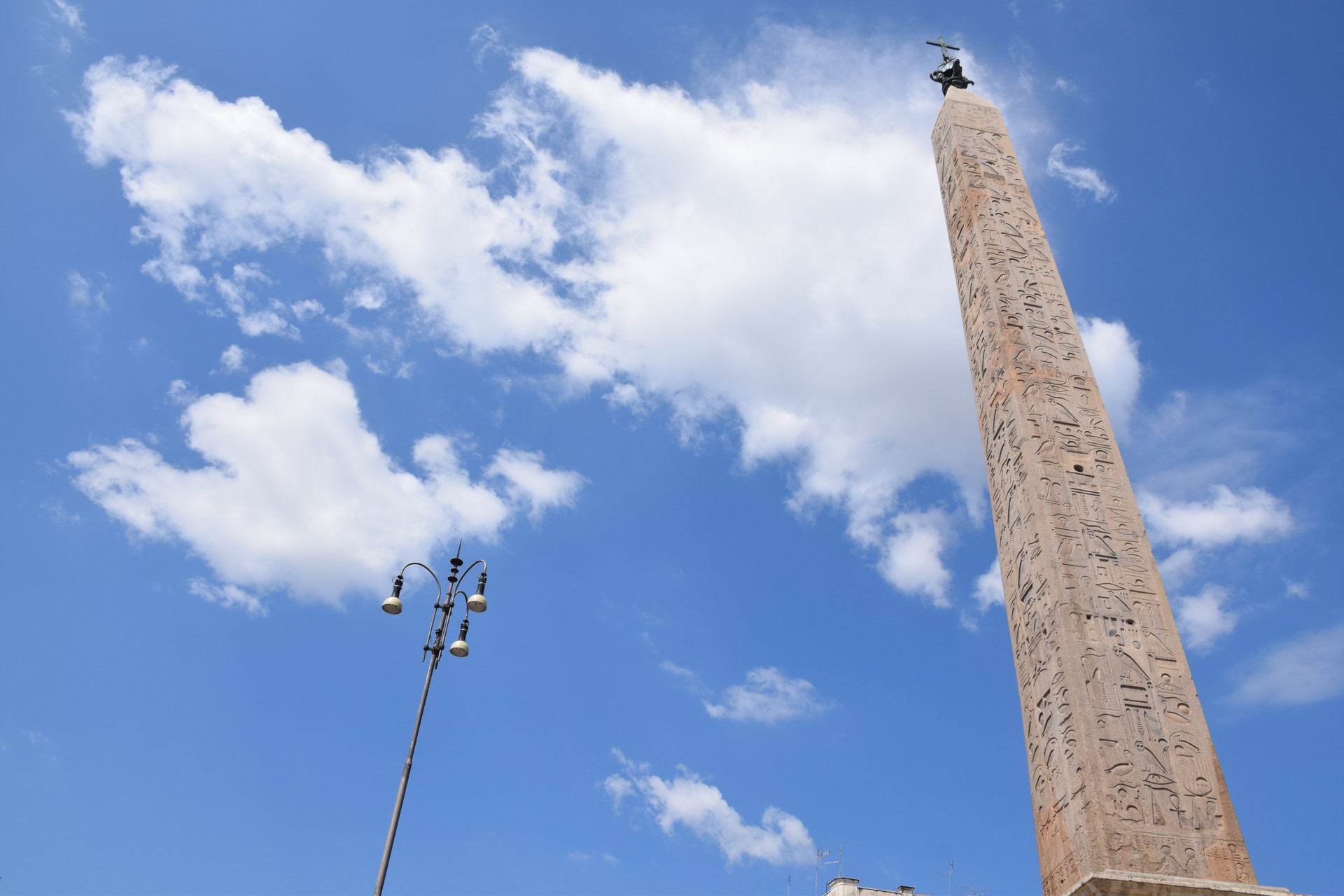 After the 4th-century transition to Christianity, the gradual decline of the Roman empire, the religious anathema of theater and games (which led to legends of Christians being fed to lions), and the various barbarian Sacks, beginning with that of Alaric in 410, the area around the Colosseum, which was eventually converted into a fortress, assumed a new semi-rural character. The focus of activities became the isolated religious sites, the most important being St. John’s in the Lateran, one of the two churches founded by Emperor Constantine after his conquest of power as a Christian convert in 312. The Lateran became the cathedral of the city and until the 15th century was the principal dwelling for the Pope and his court. While the basilica was radically altered under the guidance of Borromini in the 17th century and the sprawling dilapidated Lateran palace was demolished and replaced by Sixtus V at the end of 16th century at the same time he planted the obelisk in the piazza, the octagonal Lateran Baptistry is still recognizable as the original 5th-century structure, although encrusted with Baroque decorations.
The remains of the Acqua Claudia acqueduct which took water to the imperial palace on the Palatine hill, protrude from the buildings across the piazza from the Lateran Baptistry and can be followed with some interuptions along the crest of the hill going southwest.
This leads you past the medieval hospital of the Lateran, one of the oldest in the world, and eventually to the enigmatic round church of Santo Stefano Rotondo. Built in the late 5th century, when the longitudinal basilica type was not yet formalized as the standard form of church design, it is unique in its central plan. The central cylinder is supported by an ionic colonnade and lit by upper clearstories, creating a mysterious luminous core. The surrounding ambulatory was frescoed in the late 16th and early 17th century with some of the most gruesome scenes of martyrdom in the history of art. 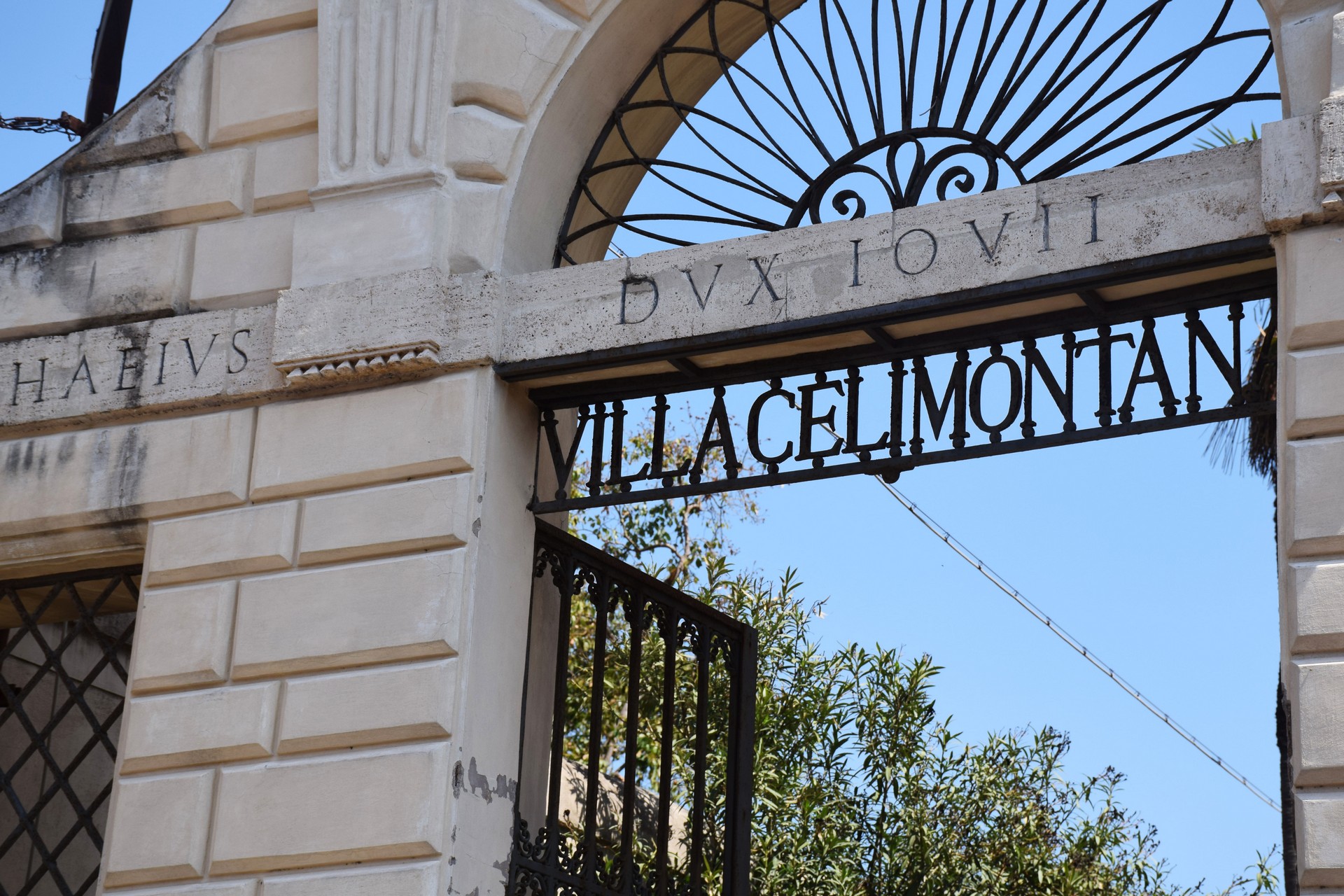 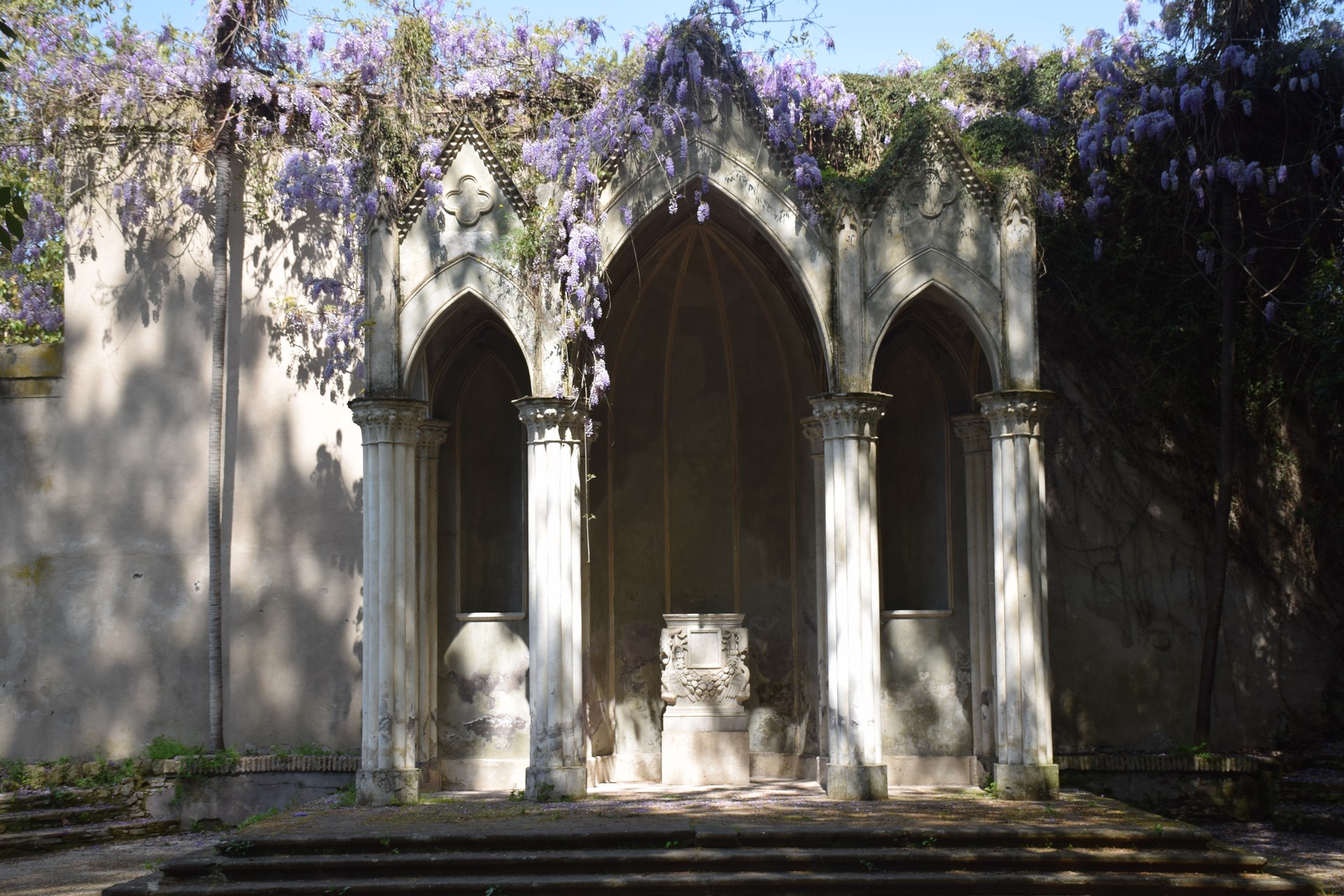 Just to the west of Santo Stefano Rotondo is a piazza with the shipshaped fountain of the Navicella that indicates the entry to Villa Celimontana. Originally built for Giacomo Mattei with formal gardens in the late 16th century, the villa and the gardens have been successively remodelled into a more casual English garden now used as a public park. During the pilgrimages organized by St. Filippo Neri, Villa Mattei became famous on the walk to the seven basilicas as the midway point where pilgrims would have their picnics.

Finally we must discern who was Pope Joan, la Papessa Giovanna, the legendary female nemesis to the exclusively male office of the papacy. The area around the Hotel Lancelot can indeed be called her turf. The little aedicule housing an image of the Madonna located between San Clemente and the Hotel Lancelot in the popular imagination was believed to be an “imago papissa,” a shrine to the ill-fated female pope. The legend, as transcribed by the Vatican librarian Platina in the late 15th century, held that Joan, a brilliant theological student, had concealed her gender and entered holy orders as a Benedictine monk. She was elected as Pope John VII in the 9th century by virtue of her great eloquence and succeeded in concealing her gender for two years from the court. Following a dalliance with a servant she became pregnant and allegedly gave birth during a procession while passing through the Colosseum.

The area between the Colosseum and San Clemente was thought to be the scene of her demise where she and her child met their death. So strong was the legend that until the late 16th century the procession for the papal inauguration, perhaps the most important ritual in the career of a pope, specifically avoided passing through the Colosseum or travelling on that stretch of the Via Labicana leading from the Colosseum to the Lateran so as not to be associated with the story of Pope Joan. 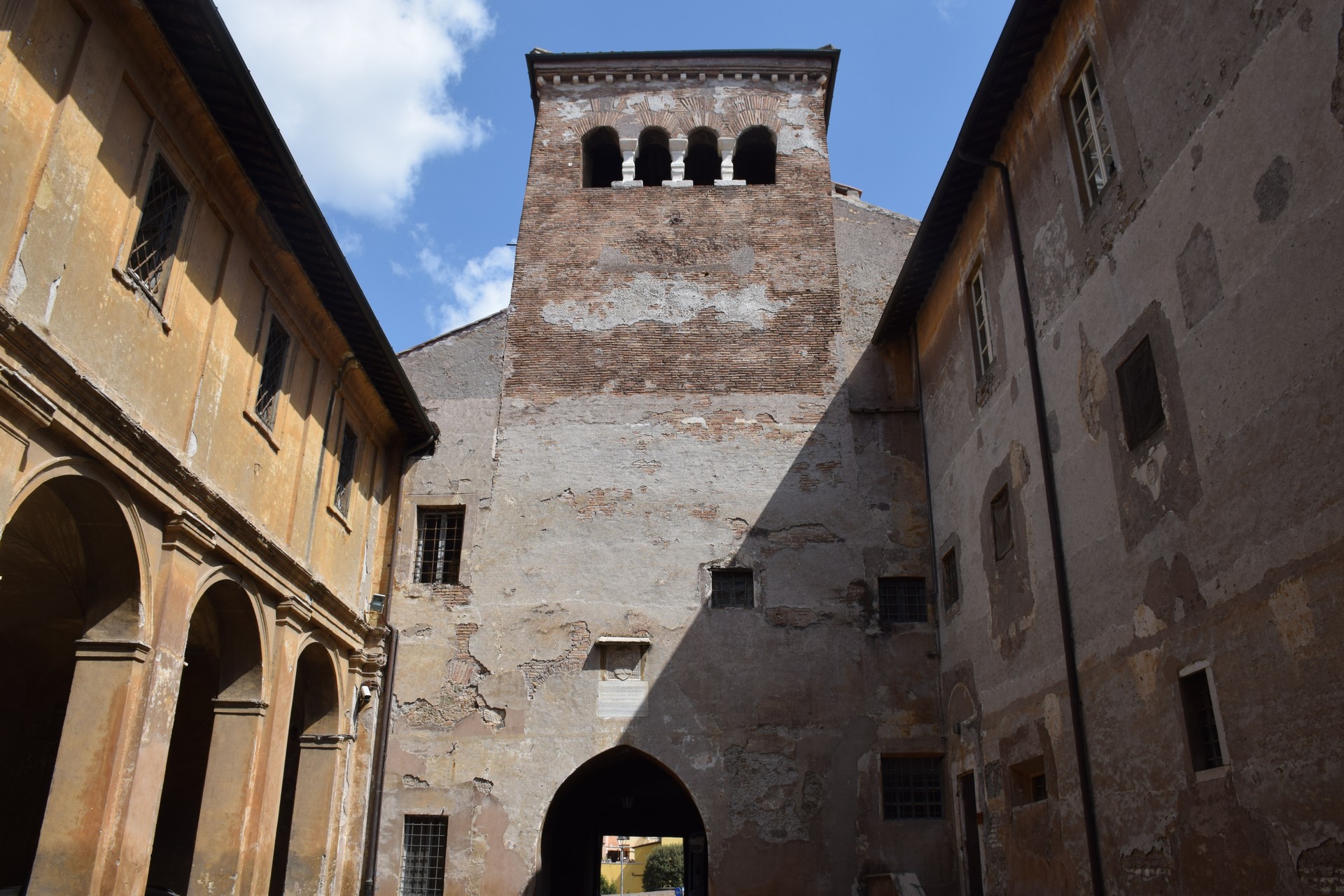 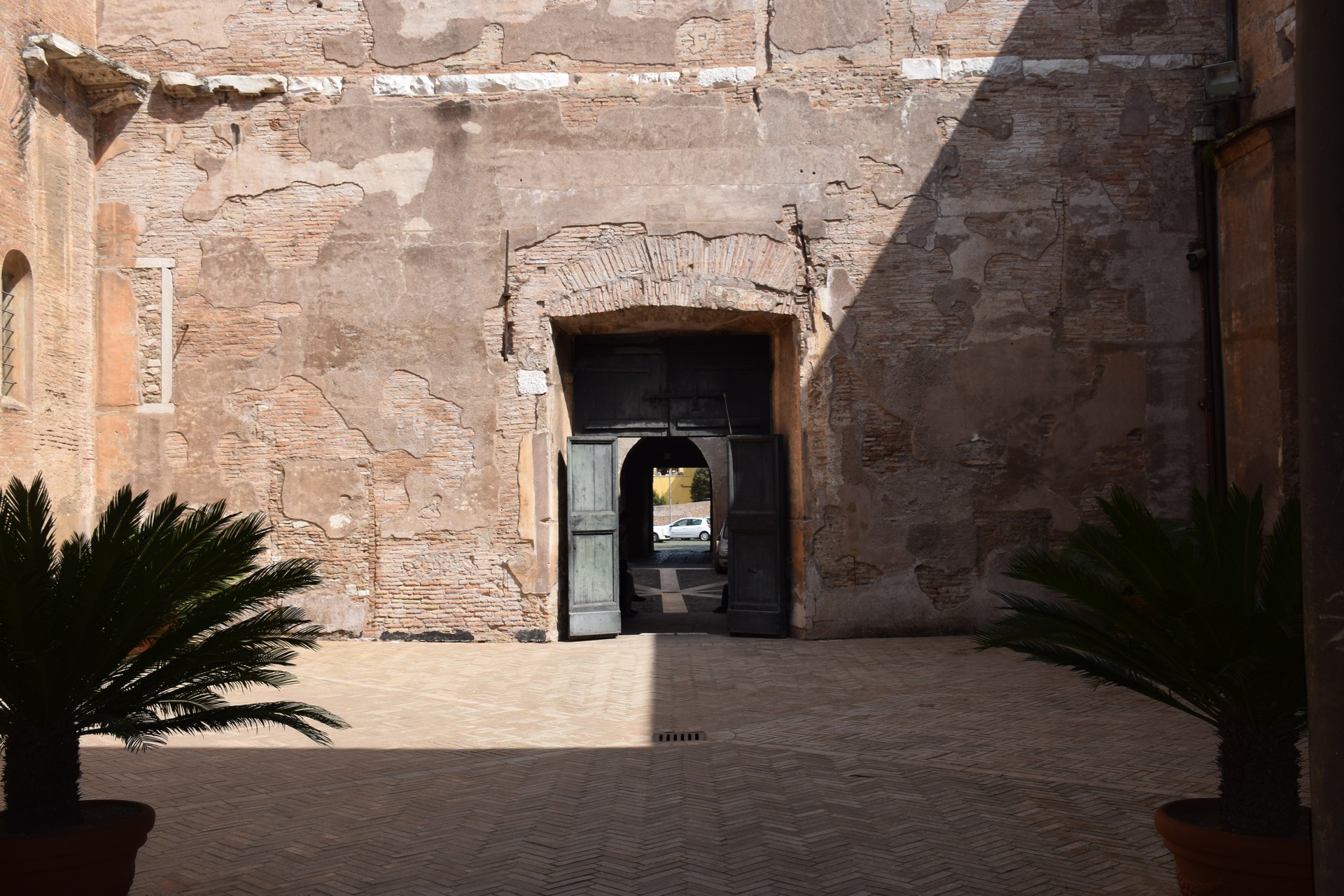 The detour of the route passed up the steep hill past the medieval convent of SS. Quattro Coronati, thought to be the first convent built inside the walls of Rome (the apse of which is seen as you look to the right from the gates of the Hotel). The legend of Pope Joan was officially discredited by the Church in the 1570s. Sixtus V ran a new straight street from the Colosseum to the Lateran, anchored at that end by the obelisk, in effect obviated the old Labicana route or the alternative past SS.

Quattro Coronati, but the area around the Hotel Lancelot in its quiet isolation might still claim with some irony to be set off as the realm of Pope Joan.

Lancelot New Year’s Eve Gala Dinner has become a real tradition. Taste a delicious four course meal, fine wines and home made desserts and experience the festive atmosphere, with live music and entertainment. At midnight a toast is offered to the New Year with Prosecco on our terrace overlooking the unique Roman skyline lit up with fireworks. Italian lentils are served to guarantee good luck and prosperity for the coming year. Vegetarian, Vegan and gluten free options are available…

END_OF_DOCUMENT_TOKEN_TO_BE_REPLACED 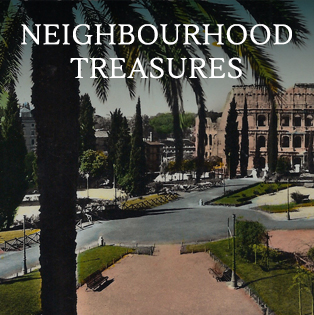 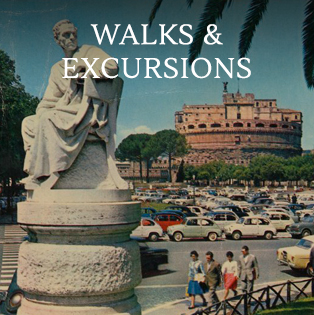 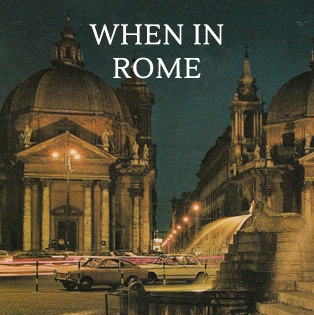