This walk between St. Peters and Piazza Venezia is about 3 km long. There are many fascinating streets and alleyways to explore between Campo dei Fiori and Castel Sant’Angelo, and many places to stop and rest along the way. 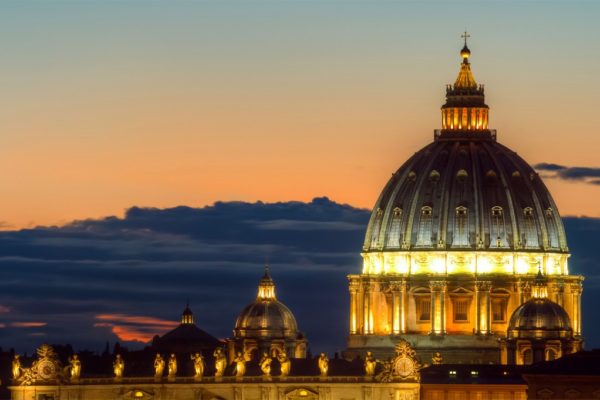 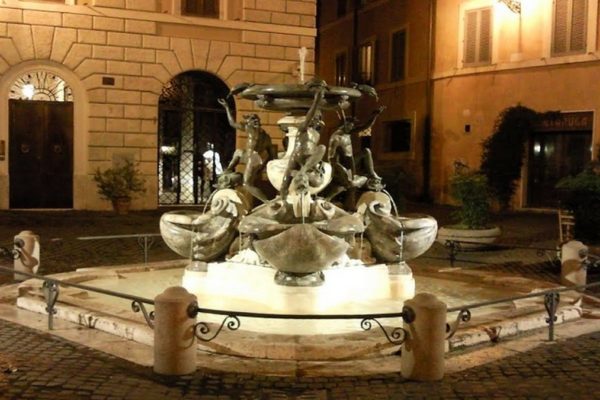 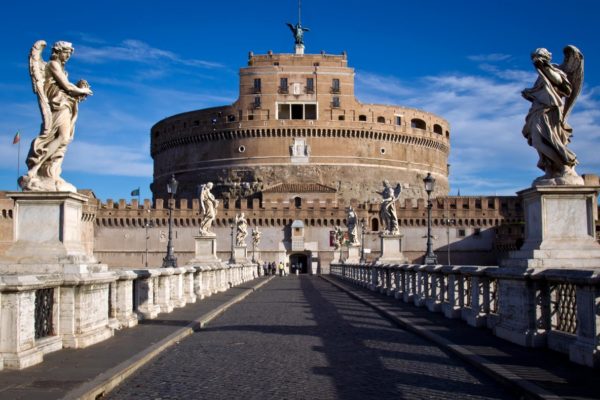 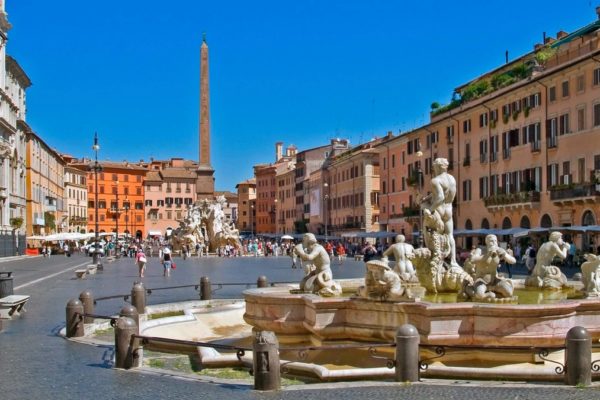 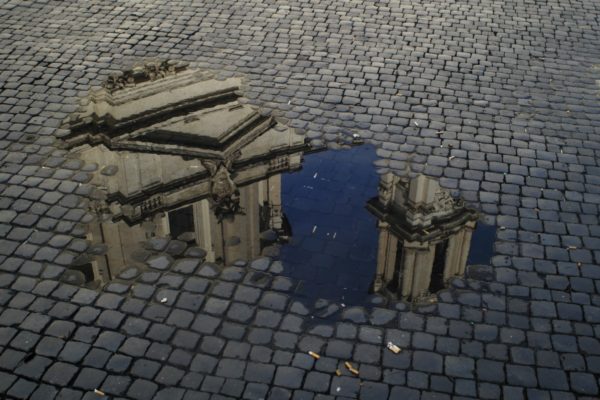 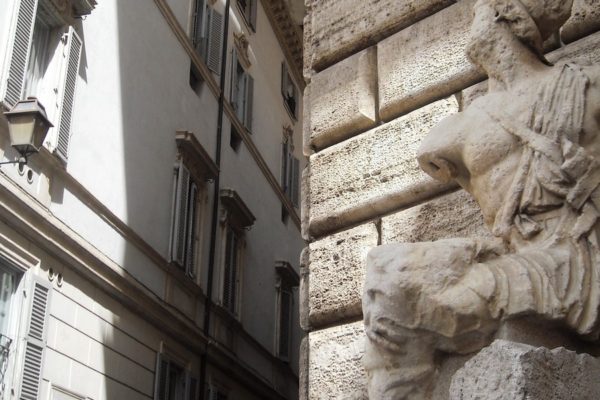 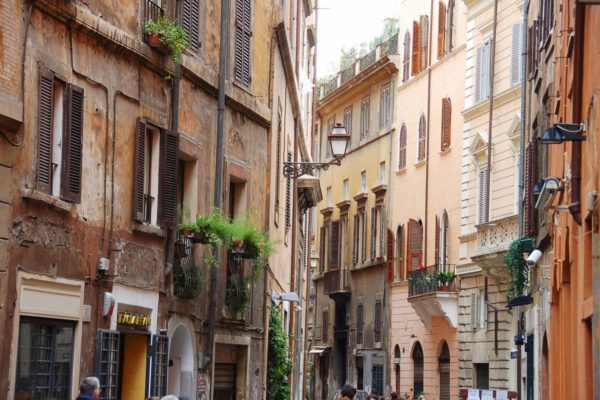 To reach St. Peters from the Hotel Lancelot or to return, take bus 81 to Piazza Risorgimento, just north of St. Peter’s or take the metro A to Ottaviano.

St. Peters is probably the largest church in Christianity and has a capacity of over 60.000 people.
The Vatican Museum and Sistine Chapel are also located in the Vatican City.

To visit these sites you will need at least 2 or 3 hours and may require a separate guided visit perhaps with one of the many excellent walking tours we can suggest.

(NB. The dress code for St. Peters is strictly enforced. Men in shorts and women with short dresses and bare arms will not be admitted.)

Catholic tradition holds that the altar of the Basilica was built over the tomb of Saint Peter. The original St. Peters Basilica was edified by the Emperor Constantine between 236 and 333 AD. After many years of abandon Pope Nicholas V ( 1447-1455 ) first commissioned reconstruction works by Bernardo Rossellino. Over the years and under several papacies, interventions and successive designs were undertaken by architects. Among these were Raphael Sanzio, who decided to transform Bramante’s Greek cross design with a Latin cross-like structure in 1514; Antonio da Sangallo the Younger; and Michelangelo who, during the pontificate of Paul III, decided to reuse the original Greek cross plan, designed the dome and supervised its construction until his death in 1564.  He also inherited the numerous schemes designed and redesigned by some of the greatest architectural and engineering brains of the 16th century. He designed the dome, taking into account all that had gone before. It is possible to reach the top of the Cupola (dome) by climbing the 330 narrow steps: once at top the view of the square below and of Rome is unforgettable. Finally Carlo Maderno took over and reverted to the Latin-cross plan first proposed by Raphael. The church was officially consecrated in 1626.

The Basilica contains numerous masterpieces and art treasures: the pavilion structure of Bernini’s bronze baldachin, Michelangelo’s moving Pietà , the tomb of Clement XIII by Canova and the mosaic of the Navicella by Giotto, located above the middle entrance to the Portico. Numerous and timeless are the works of art, mainly paintings, kept in the Vatican Museums, which preserve the art of the most illustrious artists of all times. The Sistine Chapel frescoed by Michelangelo Buonarroti between 1508 and 1512 is one of the most renowned and iconic series of High Renaissance paintings, with scenes from the Book of Genesis such as the Creation of Adam and the intense and dramatic Last Judgement.

Bernini’s ingenious solution was to create a piazza in two sections. That part which is nearest to the Basilica is trapezoid, but rather than fanning out from the facade, it narrows. This gives the effect of countering the visual perspective. It means that from the second part of the piazza, the building looks nearer than it is, the breadth of the facade is minimised and its height appears greater in proportion to its width. The second section of the piazza is a huge elliptical circus which gently slopes downwards to the obelisk at its centre. The two distinct areas are framed by a colonnade formed by doubled pairs of columns.

It is suggested that you walk down Via dei Corridori – Borgo S. Angelo which follows the fortified walk way connecting St. Peters and Castel Sant’Angelo. This was once a fortress of the Vatican and Popes would use this walkway in times of danger.

Originally built between 135 and 139 as the mausoleum of the Emperor Hadrian, from the 14th century it was converted into a fortress, prison and papal residence. The unique monument houses the National Museum where, besides the stuccoes, frescoes and furniture of the papal apartments, one can also admire an important collection of ancient arms.

There is a panoramic view of Rome from the top of this monument. During the summer months, dance performances are organized on the terrace which you may be lucky enough to see.

This street, and the many alleyways which lead off it, give a vivid sense of the traditional Rome of small workshops and traders.

This unique oval shaped piazza was edified on the ruins of Emperor Domitian’s stadium (AD 86) .
It was known as Circus Agonalis a competition arena, where games, tournaments and processions took place. From the 17th to the 19th centuries the square used to be flooded to allow barges for the nobility to parade in a background of fireworks.

In the centre of the square is Bernini’s dramatic Fontana dei Fiumi, or four rivers fountain. Four allegorical statues portray the Nile, the Ganges, the Danube and the Rio de la Plata, symbolizing the four corners of the world. Overlooking the central fountain is church of Sant’Agnese in Agone designed by the great architect Francesco Borromini.

From the beginning of December till Epiphany (6 January), this piazza is occupied by stalls selling sweets and toys and statues for the nativity cribs.

Piazza Pasquino is known for the torso of a statue representing Menelaus with the body of Patroclus and which became known as Pasquino after the name of a tailor who lived nearby and who had a reputation for lampooning the powerful. His tradition continues as messages and poems continue to be placed at the base of the statue.

The name of this square is derived from Torre Argentina, which takes its name from the city of Strasbourg, whose original name was Argentoratum.

In the centre of this square are the remains of four sacred temples and Pompeo’s theatre. The circular shaped temple (a rarity) used to contain a colossal statue of a female divinity – the head of the statue measuring 1.46 meters is now in the Capitoline Museum.

For cat lovers there is a famous cat sanctuary amidst these ruins.

This charming piazza in the heart of the old Jewish quarter is the site of one of Rome’s loveliest fountains, designed by Giacomo della Porta 1581. The fountain was restored in 1658 and the sculptures of the youths bearing tortoises, after which the fountain has been named, have been attributed to Gian Lorenzo Bernini.

The Campidoglio, or Capitoline, was the most important of Rome’s seven hills. The piazza at the top of the hill was designed by Michelangelo Buonarroti in the 1530s and took over a hundred years to complete. The grand stairs leading up to the piazza were also designed by Michelangelo. The building opposite the stairs is Rome’s city hall. At the centre of the piazza is  a copy of the magnificent second century equestrian statue of the emperor Marcus Aurelio.

Considered to be the heart of the city of Rome. Several important monuments, ruins and museums are in the vicinity of this square.

From Piazza Venezia you can continue along one of the suggested routes. It takes about 15 minutes to walk from here to the Lancelot along Via dei Fori Imperiali. Alternatively, there are several buses you can take (85, 87 or 51).